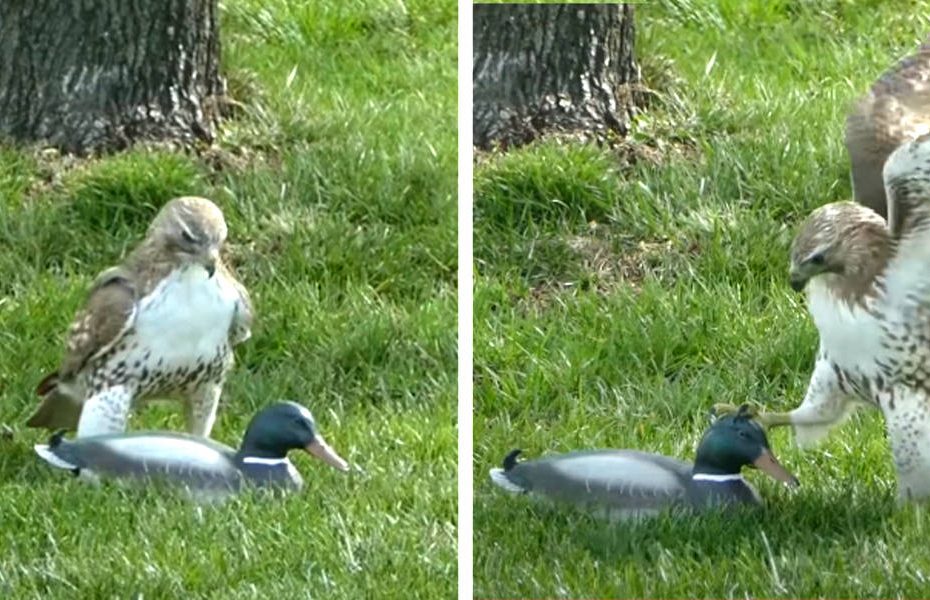 Even though the animal kingdom is filled with the unlikeliest of friendships, we should not forget that clashes are also a part of the animal kingdom in which the predator hunts the prey. The story we bring to you today is of a hawk who had his status challenged. The majestic hawk in our story, came across a duck while he was out looking for something to fill his belly.

The duck was relaxing peacefully on a patch of turf, paying no attention to the presence of the mighty hawk. The hawk was taken by shock because the duck appeared to be questioning his power. The bird of prey couldn’t bear to be disregarded in this manner. There was also the fact that this hawk didn’t want his job as a ferocious hunter to be overlooked by a paltry duck, especially with the duck being an unequal opponent.

The duck didn’t appear to be mindful of the hawk’s hunting technique and the hawk was frustrated because he was unable to create fear within this bird. However, what the hawk didn’t realize was that this duck was merely a decoy and fake figurine. This is the reason behind the duck not being intimidated by the presence of this predatory bird.

Luckily for you, we have video footage of this whole incident and it is guaranteed hilarious. For a short while, the baffled hawk attempts to scare and overcome this unique-looking duck. The hawk can be observed looking around from time to time as if to ensure that he wasn’t being made a fool of by someone. At first, the hawk walks toward the duck at a fast pace and tries to grab the duck with its claws.

Then, after seeing no reaction from the other end, the hawk goes around the duck, placing its claws all over the duck’s body as if it were trying to wake the duck up from a deep slumber. Finally, all his hard efforts fail and the bird of prey then gives up and leaves in search of a more worthy opponent. This hawk is never going to forget the day he was bested by a fake duck.